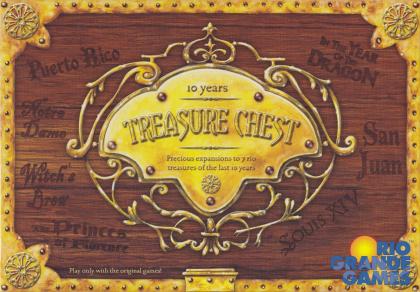 The 10 year anniversary of alea is celebrated with an expansions box: the Schatzkiste. A medium sized box, containing 10 expansions for 6 alea games.

New buildings for Puerto Rico
The Jeweler expansion for Puerto Rico
New buildings for San Juan
Event Cards for San Juan
Nine new cards for Notre Dame
A small set of new events for In the Year of the Dragon
Building the Chinese wall for In the Year of the Dragon
Material for a 6th player in Witch's Brew
'Magic abilities' for Witch's Brew
Amulets for Witch's Brew. For a more exciting game with fewer players.
A new table for Louis XIV

Released in Germany in April 2009.