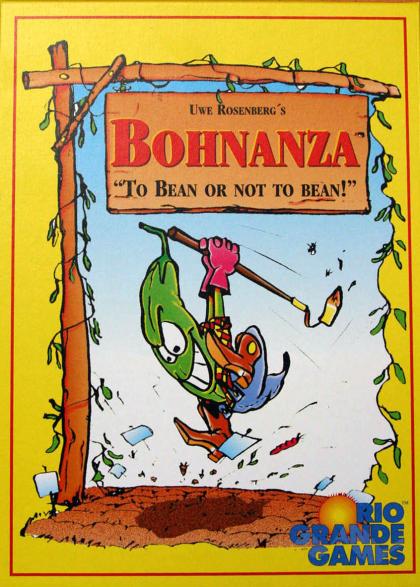 Bohnanza is the first in the Bohnanza family of games and has been published in several different editions.

The cards are colorful depictions of beans in various descriptive poses, and the object is to make coins by planting fields (sets) of these beans and then harvesting them. To help players match their cards up, the game features extensive trading and deal making. One of the most unique features of the game is that you cannot rearrange your hand, as you need to play the cards in the order that you draw them.

The English version from Rio Grande Games comes with the first edition of the first German expansion included in a slightly oversized box. One difference in the contents, however, is that bean #22's Weinbrandbohne (Brandy Bean) was replaced by the Wachsbohne, or Wax Bean. This edition includes rules for up to seven players, like the Erweiterungs-Set, but also adapts the two-player rules of Al Cabohne in order to allow two people to play Bohnanza.