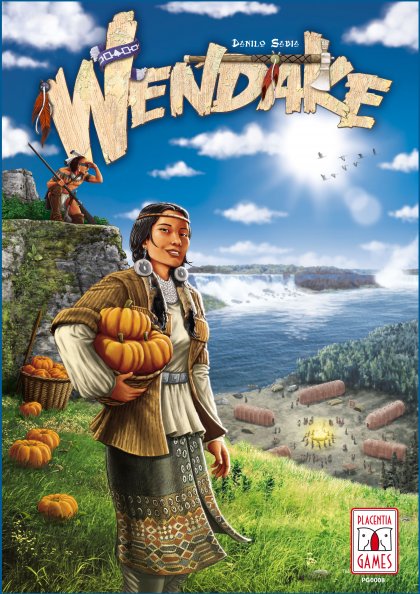 &quot;Wendake&quot; is the name that the Wyandot People use for their traditional territory. This population, also known as the Huron Nation, lived in the Great Lakes region together with the Iroquois, Shawnee, Potomac, Seneca, and many others. In this game, you explore the traditions and everyday life of these tribes during the 1756-1763 period when the Seven Years War between the French and the English took place in these territories.&#10;&#10;But this white man's war is really only a marginal aspect of the game; the focus is on life in the Native villages, fields, and forests. In this game, you won't find the traditional teepees since those were used by southwestern tribes who moved their camps to follow the herds of buffalo. The Natives of the Great Lakes were sedentary, living in long houses. The women farmed beans, corn, and pumpkins, while men hunted beavers in the forests, mainly to sell their pelts as leather.&#10;&#10;In the game Wendake, you are placed in the shoes of a chief of a Native American tribe. You have to manage all of the most important aspects of their lives, earning points on the economic, military, ritual, and mask&#8; tracks. The core of the game is the action selection mechanism: You have the opportunity to choose better and better actions over seven game rounds, and the winner will be the player who can find the best combinations of actions and use them to lead their tribe to prosperity. Each player has their own 3x3 action board that is comprised of nine action tiles. The first time you select an action tile each year, you may choose any tile; the second and third times that year, you must choose another action tile in the same column, row, or diagonal as your previously selected tile(s). If the action tile you choose shows more than one action, you can use them only in the order shown, from top to bottom. After the last player has placed (and resolved) their fourth action marker, the restore phase begins.&#10;&#10;During the restore phase, all players remove the action markers from their tiles and flip the tiles they used face down so that they show the opposite side. All players then move their action tiles down one row so that the top line of their action grid is empty and the three tiles from their bottom row are now outside of the grid; if any of these three tiles shows the ritual side, they must be flipped back to the action side. The first player may now set aside one of the three tiles below their grid and replace it with one of the six advanced action tiles near the board or with any action tile they already set aside in previous years. This new tile is added to the tiles below the player's grid. Then, whether a new tile was taken or not, they shuffle the three tiles that are below their grid and place them in random order on the top line of their grid, all showing the action side.&#10;&#10;During the game, you score points in four tracks, with these tracks being coupled randomly at the beginning of the game. The game ends at the end of the seventh year, and for each pair of tracks, you score only the number of points indicated by the score marker on the lower value. Sum these points from the two pairs of score tracks to see who wins.&#10;&#10;